I was going to write Part 2 of my spinning adventures, but I really wanted to write about what I have been working on the last two weeks. Some very dear and long-time friends are designing a permanent installation of a Day of the Dead altar for the Natural History Museum and commissioned me to weave the LA. River as part of the piece. It was a great project, so of course, I said yes, then I found out the short deadline and the size. It needed to be 6-7 inches tall x 10 feet wide which ordinarily wouldn’t be a big deal, but in this case the waves need to go horizontally and I couldn’t use one of my regular looms. I decided to build a loom. I made it 12″ x 5 ft. figuring I could weave the piece in two sections and then splice them together. It was a little more work than I thought since first I had to measure 1/4″ marks on both sides and then hammer in 600 nails. Yes, 600 NAILS!!  Here’s a pic of me starting the piece on my homemade loom. Please ignore the mess in the background, there’s no time for housework when working on a project like this, lol!

I jumped right in and didn’t even take the time to make a sketch. It was design on the fly! Not the way I normally work, but time was short. The loom was a bit cumbersome, but worked great!

After many hours and late nights of weaving, the first panel was done. It was a great feeling and I was pretty pleased with how it came out, until I realized I needed to weave the other panel. I was pretty exhausted from running my graphic design business during the day and then weaving into the wee hours every night. But, I had to buck up and weave part two, which thankfully seemed to go a bit faster.

I finished it in time (whew!) and here is a pic of the piece just installed on their altar.

Of course, I now keep wondering if it would have been easier to weave it on my Saori loom using the comb reed. Best not to drive myself crazy and think about that too much, I guess. It was a challenging project and I am happy with the result and so were they. I also like knowing that I contributed to this representation of a tradition in my culture that will be part of a permanent installation in a museum.

Yes, I needed and deserved a long sleep after this.

It’s been spinning madness here at Casa Marengo Studio. I’ve had my Louet S17 spinning wheel for over a year and I have been limping along trying to learn to spin. A couple of months ago, I bought the Art yarn Flyer accessory and took an online core spinning class @HowToSpinYarn. Things finally clicked. So, I then took the plunge and bought a drum carder, so that I could make my own batts to spin.

It’s been a game changer. As a painter, I find mixing fiber on my carder like mixing paint for a painting or assembling elements for a collage. Here are some of the batts.

And, here are a few more of the yarns I have spun. The great news is that people have actually wanted to buy them, so I have started curating and spinning small batch art yarns for my Etsy store. They are especially great for weavers and other textile artists that want to add a pop of color or texture to a project.

Needless to say, I am having a ball and I am quite addicted. I also have been spinning using various hand spindles and recently bought an e spinner. More about those in my next post. 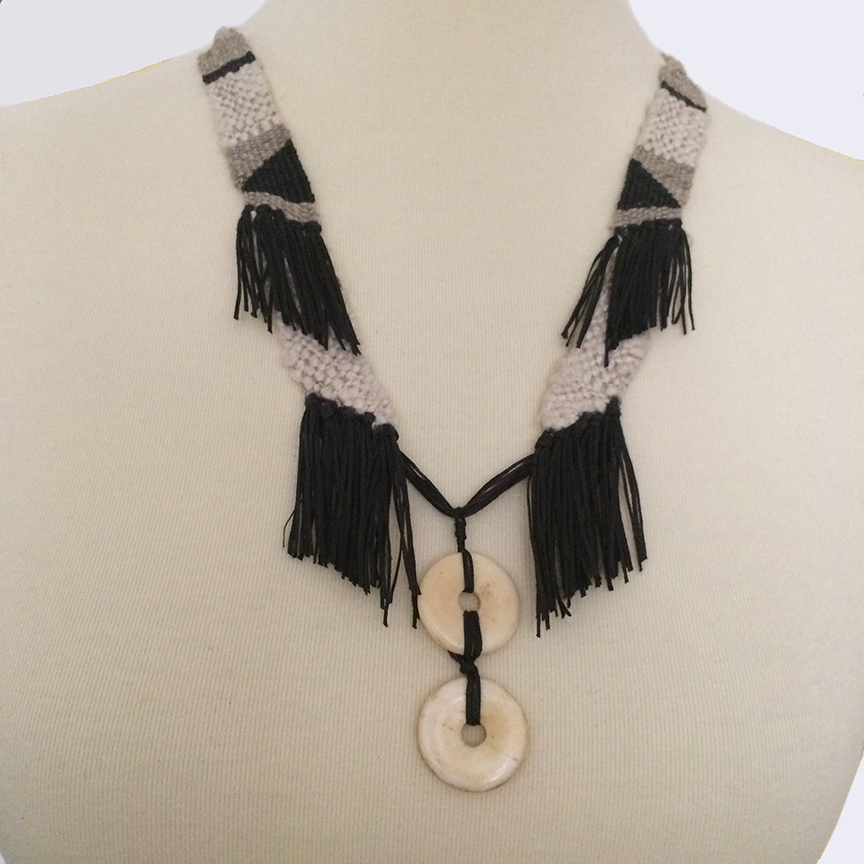 Once again, it’s been way too long since I’ve posted on my blog. There has been lots going on in the studio, but for today I am just going to focus on the necklaces I have been making.

Most of these are handwoven on either an inkle loom or small lap loom. I have been collaborating with a lovely ceramic artist, Ann Cutting who has made the medallions for the necklaces. These pieces are primarily woven with linen, hemp, silk and/or cotton. The red necklace has a polished slice of tagua nut as it’s focal piece.

Tagua is a natural, eco-friendly, and non-toxic material found in Ecuador and other South America countries. The nut’s texture and the color are known as vegetable ivory. Wouldn’t it be nice if this alternative ivory reduced the slaughter of elephants? When the nuts are harvested, they are very soft and they can be eaten as a fruit. As it matures it becomes hard like animal’s ivory.

Each piece is unique and I rarely make duplicates. If you are interested in any of my pieces, please visit my Etsy shop. 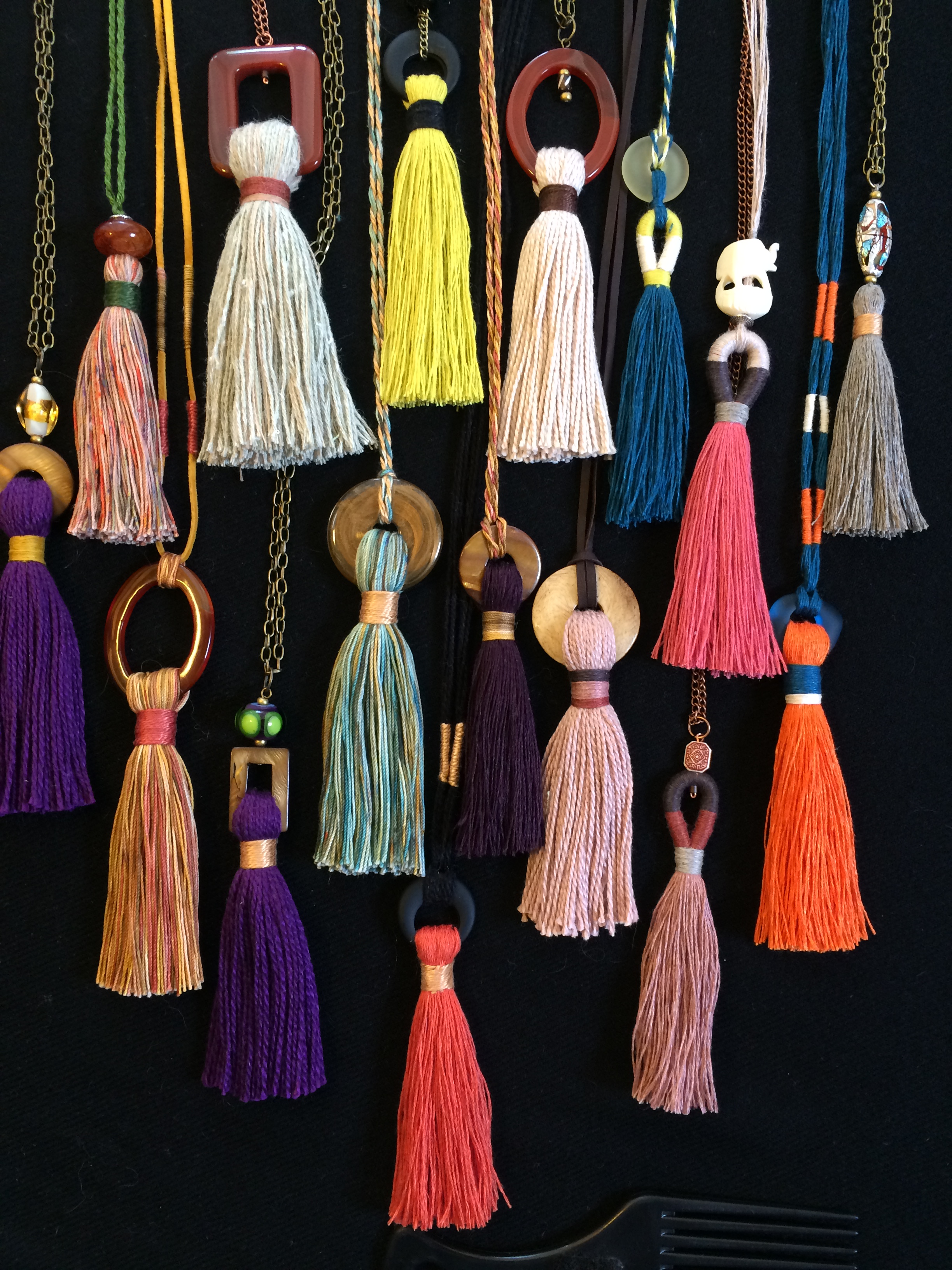 that it looks like this is going to another mostly picture post. I’m trying to make work for my Etsy shop, so I’ve been pretty busy and not much time to blog, so photos with captions it is.

First up, I’ve been making many necklaces, both tassel and woven. I am also working on some bracelets, but don’t have a photo to post just yet since they aren’t quite finished.

Next up is clothing using a combination of weaving and sewing. I’m still working on a vest and camisole in this same yardage, then moving to a black palette.

This is a linen cross back apron commissioned by a friend some time ago and I finally finished it. I have one just like it and I love it!

And, last, but not least, I found time to do a study for a painting for my Jazz Series. This one is based on Thelonious Monk’s “Well, You Needn’t.” I think it would also make a great tapestry, but that would  be challenging and perhaps drive me over the edge, lol!

Have a great day everybody!

Making fabric on my Saori loom for crop tops and vests. Mostly cotton and silk yarn with a small amount of wool, linen and acetate yarns.

Making purse insets with yarn I hand spun from a hand pulled roving by atapestryofgrace. It is a combination of hand dyed wool, bamboo and flax. I’m a beginner, but I think it came out okay as an art yarn. I think it looks like kale salad.

And, lastly, here is my new box tape loom made by Janet of HandyWomanShop. I think it is quite beautiful. I am reading a book on tape looms which is more fascinating than it sounds. It’s filled with the history of tape looms including great photos. I also learned where the term “red tape” likely comes from.

Okay, that’s it for today, folks!

I like keeping Sundays for myself to play in the studio. I either paint, weave, block print, rust/eco dye or sew. So many fun choices that sometimes I can’t decide. It’s a great time to experiment and not worry about any deadlines. This past Sunday I spent a relaxing day in the studio working with pine needles and wool. The tricky thing about pine needles is that the tips are fragile and you have to be careful not to break any off while weaving. The other hard part is keeping them steady when starting the weave since you can’t really warp them on a loom. I made two weavings, but only one of them (this one) seemed to work. I really like it and will be making more for my Etsy store.

Weaving, my new obsession. I love all the different textures and materials. The artistic possibilities seem limitless. I just started a tapestry based on one of my abstract paintings. It is extremely challenging and painting now seems so much easier. I have to say that I prefer weaving on a frame rather than my rigid heddle loom, but this is probably due to the fact that I am not very proficient yet. I am taking a class and maybe as I learn more, I will like it more.

On another note, I just finished the Liesl + Co Gallery Dress. I went with the Kaufman Rustic Chambray Linen in Indigo. And, I have to say, I love, love, love it! I will post pictures soon.

This week, I made this red linen tote for my aunt’s birthday. It is hand block printed with one of my new linocuts. I also added a little hand painting and embroidery to it. I had never made a tote before, so I was quite pleased with how it came out. It was supposed to be an every day bag for her to use on her errands, she said it was really nice so she was only going to use it for special occasions. Not what I had in mind at all, lol!

The other thing I made this past week was a baby pinafore for my cousin’s new baby. I’ve never made baby clothes before and it was so easy and so much fun. And, it was so tiny! I think I am going to make another!

Lastly, I’m just going to toot my own horn a little and post that my oil/wax painting “Epistrophy” based on a Thelonious Monk song is hanging in the window of Random Framing. Any exposure is good exposure, right?

It’s not a great pic, but you get the idea.